I’ve been finding it hard to sleep at night here. I find that no matter how tired I am, my brain just won’t switch off at night, and goes into overdrive. SO I end up tossing and turning for about an hour and half before I even get close to falling asleep. Then I wake up and I’m tired. Why?

This happened last night, and it ended up being an effort to get up at 9. I didn’t know what I wanted to do today, so I spend a bit of time working on some client images that are way overdue, whilst munching on some tiny bananas and some coffee in a bottle that didn’t really taste like anything. My laptop has become frustratingly slow, clogged up with a bunch of client images, as well as all the shots I’ve taken in Japan so far. So I decided to go to Akihabara to buy a hard drive. I’d had enough! 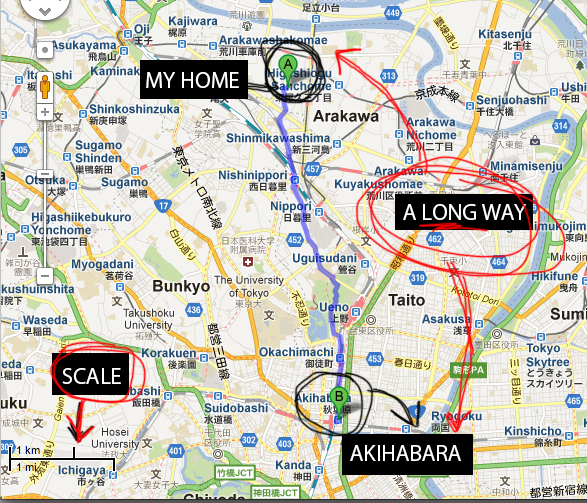 I got ready to go, then looked at Google maps to see just how far I had to ‘hike’ to get there. It was only a little further than Ueno, and about as far from Ueno as Asakusa was (where I went yesterday.) All layered up, I headed out with my iPod, which I haven’t listened to in ages. I actually really liked walking along to the music, and it put me in a really good mood. It made me feel like making a few short (like, really short) videos about the trip. Maybe just picking a random day and shooting the whole day to see what I get. Or making up a little story. In any case, I kept seeing great compositions as I walked, and matching them to the songs I was listening to. Before long I was singing out loud. I probably sounded really bad, but I couldn’t hear myself because I have noise cancelling headphones (really really expensive ones that cost 9 dollars.) It was strange hearing so many English voices, so much so that it kind of mangled my Japanese when I first switched back upon ordering lunch.

I got to Ueno really fast, and was already hungry as I began to cross the park. I thought I’d better stop for some lunch before continuing the treck to Akihabara. So I went to the little corner of 4 stores where I got the mushroom dish that I ate with dinner last night. I picked out a bento from the salad place next door, and happily took it to Ueno park, where I found a spot to sit and eat. A dodgy looking pigeon tried to come close to me as I unpacked my lunch, but he didn’t get to close because I freaked out and kind of spasmed, which scared him off because he thought I had ADHD. 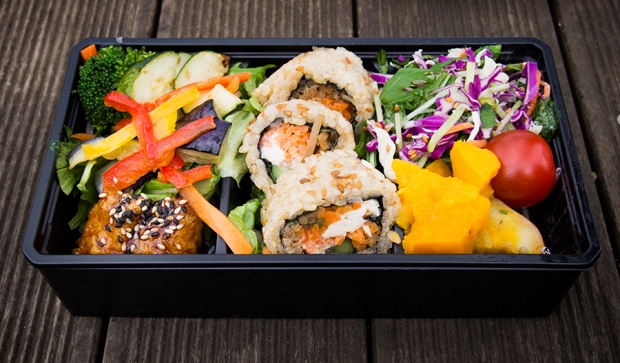 The bento was so tasty! On the left was some braised chicken and a salad with marinated vegetables and broccoli. The centre was brown rice sushi that had chicken and vegetables inside, and salad underneath. Then on the right was a chicken, cabbage and sesame salad, some simmered sweet potato and citrus pumpkin, and a cherry tomato. It was so tasty, and just what I felt like!

After depositing my rubbish in a heavily decorated panda bin, I headed back in the direction of Akihabara. As I was crossing a street, a flash of bright orange caught my eye, and I had to go down an alleyway to investigate it. When I came to the end of the alley, I was at the lakeside of Ueno park, but the lake was filled with heaps of (dead?) wreeds. The colour was so pretty, and I could see a shrine poking up from the other side. I couldn’t believe how vibrant the burnt orange colour was. 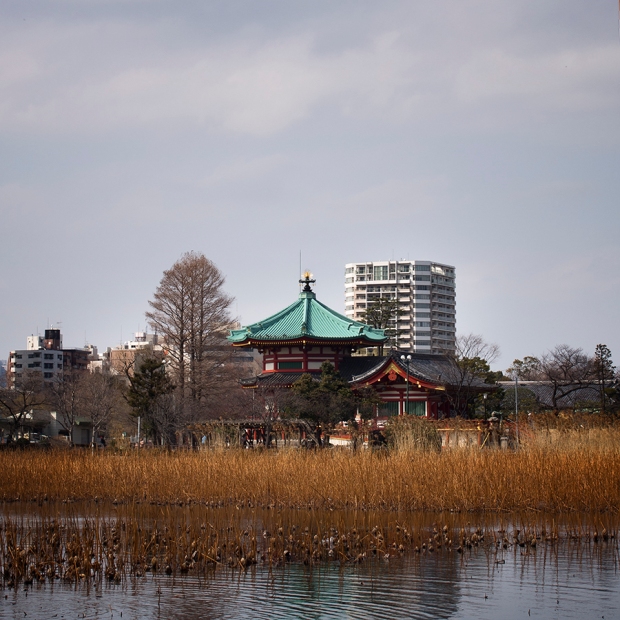 From the lake, it only took about 20 minutes to get to Akihabara (with a small detour to the basement food level of a department store, where I filmed a sneaky video from hip-level, even thought cameras aren’t allowed.) I just followed the train line from Ueno, so finding Akiba was easy (locals now call it ‘Akiba’ instead of Akihabara, apparantly.)

As I was nearing the station, I walked past an onigiri store selling brown rice onigiri. I haven’t seen very much brown rice in Japan, so I jumped on the change to buy some. I got a brown rice and konbu onigiri to have for lunch tomorrow (when I plan to make a bento to take to the zoo!) Luckily I was full from lunch, otherwise I would have devoured it on the spot. 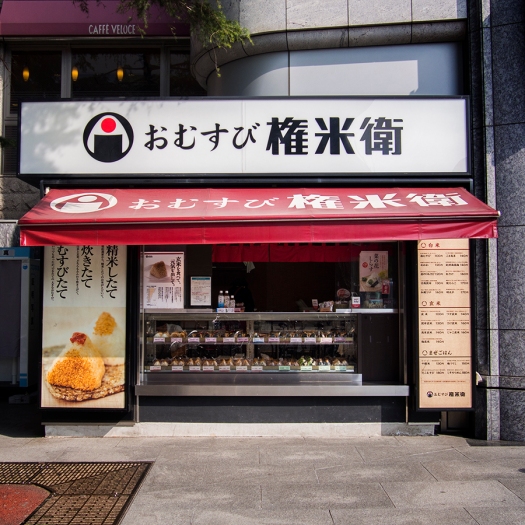 I won’t describe the next few hours in intricate detail, because all I did was roam around the electronics stores hunting for portable hard drives comparing prices. I also wanted to buy an mp3 player for my dad as a gift, but they all cost over 100 dollars, and he would definitely not approve of that (“don’t buy me anything expensive! Only spend ten dollars!”) They only seemed to have 3 kinds of music player, no matter where I looked. iPods, a rectangle iPod rip off, and a thin voice recording mp3 player thing. I was also tempted to buy a macbook air again, because 30,000 yen is pretty hard to pass up. But I actually don’t need it, so I was a good girl and saved my money. I did get a hard drive cheap though, so I was happy. I also found a post office by accident, and posted the birthday card I had written for my grandfather. 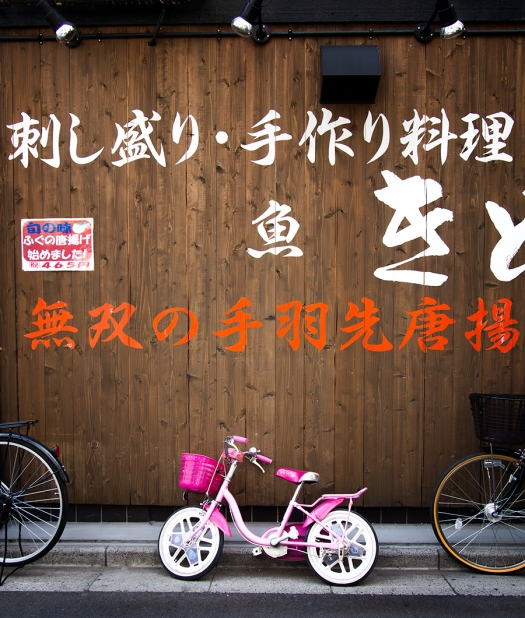 Most of the stores in Akiba are multi storey, and my legs were getting pretty tired. I actually felt a bit tired from walking around all day, so I have no idea how I’m going to cope climbing mountains. That training is starting to sound less like a ‘good idea’ and more like a requirement. It was almost 5pm and was starting to get cold, so I walked back to Ueno and bought some things for dinner. There is a store where you can get a container of any size and with numerous amounts of compartments, and fill it with any kind of dish you like. I wanted to do this for dinner, because I got to sample lots of different dishes. This is what I bought… 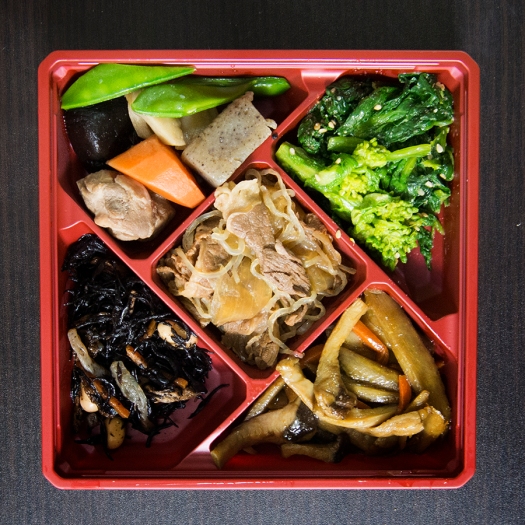 After taking a million years to decide what I wanted, and paying for it, I caught the train back to Nishi-Nippori and walked home from there. At home I edited the last batch of client images for the day, and talked to my mum on Facebook. I hadn’t heard from her for a while, so it was good to know what was going on.

For dinner I had stir-fried tofu, vegetables and kinpira (which needed eating) with a fried egg, rice, and the okazu I bought today. That included nikujaga (a beef, onion and potato stew), hijiki and bean salad, some nimono vegetables (simmered in soy and dashi, etc.), mushroom and burdock root with pinenuts, and a kind of spinach thing with sesame seeds. Everything was really tasty, especially the nikujaga. 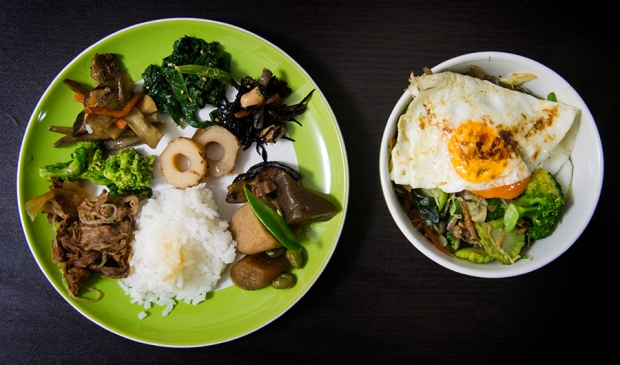 I was still hungry after dinner, having spent all my energy walking, so I ate some cereal with sliced banana that I bought from the market, as well as the last yoghurt in my fridge, which had gotten a little too close to the freezer and ‘grown’ sheets of ice in vertical lines throughout the yoghurt. Kind of like a vienetta, but with yoghurt instead of ice cream, and ice instead of chocolate. Then I craved dorayaki, so I raced to 7/11 and bought an anko and chestnut one, which wasn’t great. I need to go back to the old lady in Nippori and buy one from her- that thing was amazing.