No earthquakes last night, but I still managed to get a terrible sleep thanks to the dramas of cancelling my credit card. Today I had planned to meet a good friend, Saki, for ramen in Tachikawa (which is about an hour away from me by train.) This called for emergency coffee breakfast. I had a Dotour soy latte stashed in the fridge, which really just tasted like soy milk and had zero waking up effects whatsoever. I had eaten dinner late last night, and was in for a huge and early lunch, so I decided not to eat breakfast. Bad, yes, but I really wasn’t hungry. I also realized I will be leaving Tokyo NEXT WEEK, so decided I’d better start looking for places to stay on the nights I hadn’t yet booked. I sent out a few inquiries, which had to be written in Japanese. So I am very thankful for the online romanji to kana converter. I’m not talking about google translate, which can come up with some very strange interpretations of sentences. I mean there is a site where you type Japanese words using the English alphabet, and the program changes the sound combinations into Japanese characters. This will probably only make sense to people who’ve studied a tiny bit of Japanese.

Anyway, after gathering all my stuff, including presents for Saki’s family, I raced to Tabata because I thought I was going to miss the train I needed to catch. But there was no train. There were a lot more people on the Yamanote platform than usual, and then an announcement came on saying there were delays on the line in both directions. So I just had to wait. Luckily I only had to wait 10 minutes for the train to arrive. On the Yamanote trains, there are two TV screens above every door. One displays video commercials and news on loop, and the other shows train information, such as what the next station is, exit maps of the station you’re arriving at, and little pictures telling you which side the doors will open on. It also shows ‘train news,’ which contains information on delays and disrupted services on all lines. I’ve seen delays caused by wind, signal problems and snow, but today’s report said that the Yamanote line delay was caused by ‘person entry.’ I’m not really sure what that means. Should I be worried about masked attacks or someone entering the station illegally. Or did it specifically give an indirect description to avoid saying that someone jumped in front of a train? Apparently that isn’t a rare occurrence in Tokyo. I didn’t want to think about it.

At Shinjuku, I switched to a rapid train, which took me to Tachikawa. It didn’t seem that rapid, because it wasn’t moving very fast, but it did only stop at a few stations along the way. Two business men sat on either side of me, and one of them had really bad onion breath, which assaulted my nostrils at random and without warning for the entire journey. I couldn’t work out which guy it was coming from.

I met Saki outside a convenience store, and we ran a few errands before heading to a ramen shop for lunch. I was really excited about eating this ramen, because Saki loves the store and raved about it. But when we got there, we found that they only serve tonkatsu ramen, which is made with a pork based soup. So I couldn’t eat anything there. We decided to find another ramen shop, and accidentally stumbled upon ‘Ramen Square,’ which was a whole collection of different ramen restaurants under one roof. Each store specialized in a different type of ramen.

I like miso ramen, and Saki likes shoyu ramen, so we picked a place that served both, and ordered our lunches from a vending machine at the front of the store. I ordered Hokkaido miso ramen, with extra bamboo shoots on top. I expected the ramen to be overly huge, like I’ve always seen it, but this bowl didn’t look too intimidating. Too much food for me, yes, but so monstrous that I felt physically afraid of it, no.

I had bean sprouts, spring onion, cabbage, carrot and bamboo shoots on top of golden-yellow noodles that still had a bit of bite to them. Perfectly cooked, in other words. It was really tasty, but would have been better with a raw egg inside (I’ve developed a love for raw egg on things.) Nevertheless, it was delicious. So good that I actually ate the entire thing. I’ve never finished a whole bowl of noodles in my life, and I don’t know how I managed to eat so much today. I did feel a bit sick afterwards from eating too much, but it was worth it.

After lunch, Saki and I wondered around Tachikawa and went shopping. We looked mostly at clothes, stationary and bento stuff, as well as stores selling a whole bunch of quirky things. I managed to resist buying a lot of things (but only barely), but my willpower waved in Daiso, where I got a few little items. They were all for presents though, so they don’t really count.

I definitely think this hat suited me… 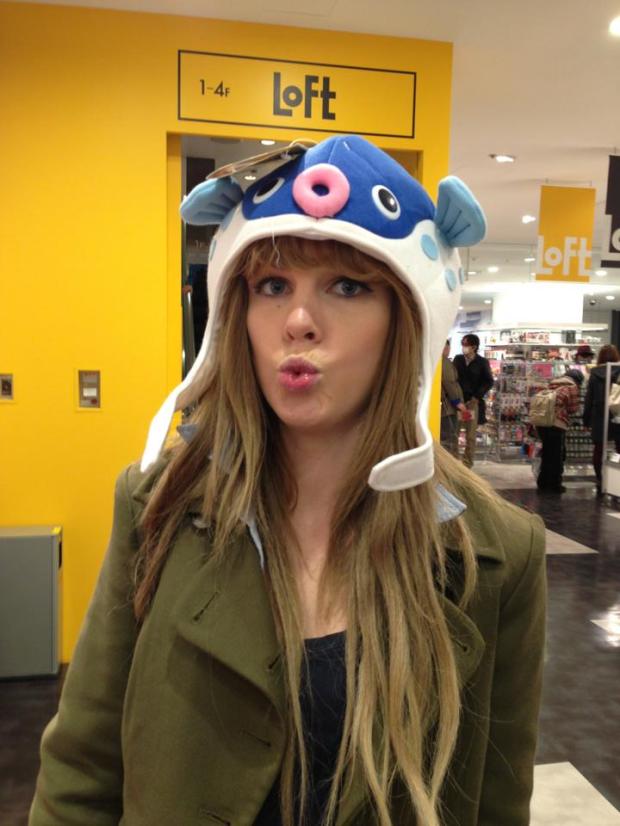 5:30 came around way too quickly, and then Saki had to go home. So I gave her a bag of presents for herself and her family, and planned to meet up again next week. There will be a public holiday, so Saki and ger family will be free. I’m really glad that I’ll get to see them all again.

Then we entered the train station and went to our separate platforms. On the platform for Tokyo, a white train pulled up which looked really different from the one I travelled out on this morning. It looked special and fast, and I didn’t dare get on it because I thought it might cost me a fortune to use it. So I waited for the next train to come along, which was local and therefore stopped at every station back to Shinjuku.

I was still full at dinnertime, so I just picked at some fruits and a bit of salad.Tomorrow I will do two sets of volunteering. Should be fun!